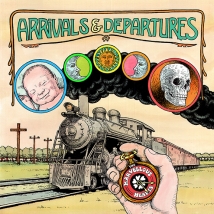 Fred Carlson grew up in rural Connecticut and came to Pittsburgh in 1973 to attend Carnegie Mellon University graduating in 1977 with a degree in Design.

He drew his first paying free-lance commissions for The Carnegie magazine while still a student 45 years ago. Fred has been a self-employed free-lancer for 39 years.

He is one of the most well-known artist/illustrators in the mid-Atlantic market having completed works as large as room-sized murals and as small as one of his 400 music packaging covers.

Fred taught Advanced Illustration to seniors in the Illustration Program at Carnegie Mellon University for 14 years. He has lectured widely on his work both as an independent artist and in his roles as Graphic Artists Guild (GAG) President 1991-1993 and Pittsburgh Society of Illustrators (PSI) President from 2000 to 2004. In 2003, Fred was a Speaker at the ICON3 National Illustration Conference in Philadelphia. He currently serves PSI as Treasurer and New Member Contact.

Fred’s nature illustration is permanently installed at the Smithsonian/National Zoo in Washington DC, Cleveland Metroparks Zoo, and Moraine State Park Jennings Education Center near Butler, PA. A retrospective exhibition including 85 works of his scientific illustration was shown in 2009 at the Moench Hall Gallery on the campus of Rose-Hulman Institute of Technology, Terre Haute, Indiana. In 2013, he chaired the large PSI exhibition “Art for a Hire Purpose” at the AIP Gallery in downtown Pittsburgh. He also recently completed two children’s book projects, “The Christmas Book of Hope” and “The Little Book of Hope.”  Fred recently presented "Portraits and Places: An Illustrated Retrospective 1981-2018" at CCAC/Boyce Campus in Monroeville PA.

Bluegrass Music Museum in Owensboro, KY. His CD cover Stop & Listen for the Mississippi Sheiks was recently purchased for permanent display since May, 2015 at the Blues Foundation Hall of Fame Museum in Memphis, TN.

Largely due to the success of his retail online store, Fred has continued to expand his market for poster sales and illustration commissions to new clients in France, Australia, Netherlands, Sweden, and Canada.

Besides here at the PSI website, examples of Fred’s work can be seen at the websites