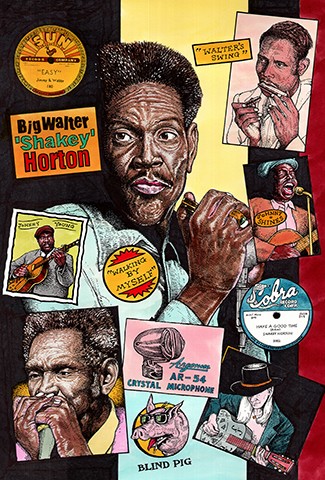 Big Walter "Shakey" Horton (1918-1981) is acknowledged to be one of the top 5 blues harmonica soloists of all time. Poster artwork commissioned by LA-based collector to join 4 others in a series including Little Walter, Sonny Boy 1, Sonny Boy 2, and James Cotton. Big Walter played around Memphis before moving to Chicago in the mid-1950s. Due to health issues his recording career was not as prolific as some others, but his work in the 1960s rates with anyone.