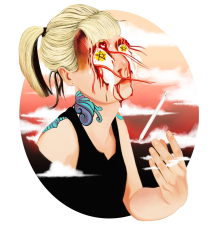 KI11ERPANCAKE is the illustration work of a random lady named Genevieve Barbee-Turner living in Pittsburgh, PA. Her nom de plume is in deference to a book title—a cozy mystery she gave 4 stars to on Goodreads.

While she hails from the Hampton Roads region in Virginia, Pittsburgh has been home since finishing up a BFA in Art at Carnegie Mellon in 2007.

Since 2016 she has been crafting decks of cards. They are like mini paintings that tell little stories and you can use them to build bigger narratives—or play poker! Each deck is a series of tales where Genevieve attempts to capture real people and places. Themes about queerness and neurodiversity run rampant throughout her work.